was born in Rio de Janeiro, and was raised in São Paulo, the largest city in South America. His love for music came naturally.
From an early age, he was a curious listener, spending hours in the school library consuming the vast musical collection that was available.

At age 11, he began studying classical guitar. Only a few years later, after entering the world of progressive rock, heavy metal, jazz, and fusion, he would discover his true vocation. Kiko was fascinated by music icons Jeff Beck, Jimmy Page, Paco de Lucía, Herbie Hancock, Pat Metheny, Astor Piazzolla, Hermeto Pascoal, and bands like Black Sabbath, Led Zeppelin, Deep Purple, Iron Maiden, and Van Halen. Such influences added to endless hours of training and dedication, giving him the drive to embark on a journey that would make him a versatile musician with a unique style. 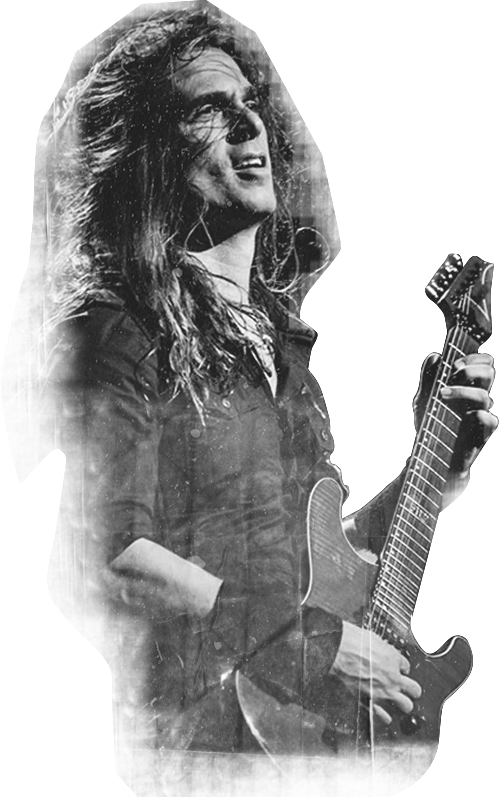 At the age of 21, Kiko released his first studio album with Angra, Angels Cry (1993). Recorded in Germany and released worldwide, the album surpassed the 100,000 copies sold mark and was certified gold in Japan. Since then, Angra has released another seven studio albums, three CDs, two live DVDs, and six Eps, receiving another gold record for the release of Rebirth (2001). Angra toured the world, becoming one of the leading bands in Brazil of all time.

In 2004, Kiko started his solo career with the instrumental album No Gravity. Except for drums, Kiko recorded all instruments.
Two years later, his second album Universo Inverso, was recorded in just three days and featured some of the best jazz musicians in Latin America. In the same year, Kiko was voted the best guitarist in the world in the Japanese magazine Burrn!, one of the most popular journals in the music scene.

In 2009, Kiko presented a new release; his third solo album called Fullblast, which features a strong dose of heavy and progressive metal in its tracks, being described by critics as "an amazing instrumental journey for Joe Satriani and Carlos Santana's fans ." In the same year, Kiko also announced his fusion project, Neural Code, where he explores rock and jazz, and showcases unique Brazilian rhythms.
Sounds Of Innocence, his fourth studio album, was released in 2012 and once again combined prog-metal, jazz, blues, and Brazilian rhythms, becoming highly acclaimed by critics and fans.

In 2013, Kiko released his first solo DVD. The White Balance was recorded at the elegant Ibirapuera Auditorium in São Paulo, presented in three phases and representing the musician's favorite styles: rock/metal, an acoustic set, and Brazilian fusion.
In addition to music, Kiko has also been dedicated to teaching and studying the music business, music marketing, and career development, giving lectures to musicians and corporations in different parts of Brazil, and conducting in-person and online courses on these topics.

2015 started off with exciting news for fans; Kiko Loureiro was invited to join Megadeth, one of the biggest bands in thrash metal, and part of the Big Four of the genre along with Metallica, Anthrax, and Slayer. In partnership with Dave Mustaine, David Ellefson, and drummer Chris Adler, Kiko recorded the band's fifteenth studio album in Nashville, Tennessee, USA. Dystopia was released on January 22, 2016 and led Megadeth to tour the world at full steam.

Throughout his career, Kiko has been in the top positions in countless polls of best guitarists, and has been on the cover of the most prominent and critically acclaimed guitar-related magazines such as Japan’s Young Guitar and American publications Guitar Player and Guitar World. Yet, it was the beginning of 2017 that would see a pinnacle in his list of accomplishments; Kiko became the first Brazilian rock and heavy metal musician to receive a Grammy. At the awards, which takes place annually and brings together the biggest names in the music industry, Megadeth received the gramophone in the category "Best Metal Performance" of 2016 with their single, Dystopia.

Ahead of the game, and now with Belgian drummer Dirk Verbeuren, Megadeth was cast in Rock in Rio 2019 (a frequent festival in Brazil; the band came for the first time in the 1991 edition). Unfortunately, Dave Mustaine's cancer treatment caused the band to postpone the 2019 performance, and Megadeth was replaced by German Helloween.
In the midst of all this, Kiko returned to the studio to record another solo album, Open Source, which was released in 2020. Once again, the musician united his influences in heavy rock with his exuberant technique and Brazilian rhythms in songs like Edm (e-dependent mind), which reexamines the digital addiction that plagues humanity today. The fifth track on the album, Sertão, delivers a classy northeastern touch along with its rhythms. Imminent Threat features the incredibly talented Marty Friedman, guitarist and former member of Megadeth.

In July 2021, Kiko shared his learning in the field of entrepreneurship with the public by launching the book "Negócios Para Criativos" (Gente Publisher, only in Portuguese), in which he encourages everyone to pursue what they love, giving them the tools they need to make their dreams come true. "Every creative must be passionate about the act of creating, without judgment and without fear of discarding their ideas," he says at the book's presentation.

Active as never before in the pandemic, Kiko continued teaching and participating in his studio projects while waiting for the day the band could be reunited.

In regards to the band, with Dave Mustaine healthy and on top of his game once again, Megadeth recorded the successor of Dystopia (scheduled for release in 2021), and is already back on the road. The American tour started in August 2021 and 2022 tour dates have already been announced in Europe, Brazil, and the US.
After a 30-year career, Kiko Loureiro celebrates his arrival to a highly reputable position as a complete musician and artist who constantly tests his limits and is always open to new and innovative ideas.